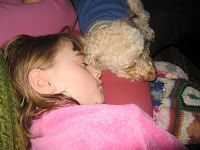 Coretta has been having a great time preparing for her big competition for Destination Imagination March 1st. She has also been busy playing basketball and is getting quite good. We are thinking about enrolling her in basketball camp this summer to help improve her skills even more.

In school Coretta has been very busy. In Science, they are studying frogs, particularly their own frogs that they have been observing ever since they were little tadpoles!

In Math they have been busy studying geometry, addition, subtraction, telling time, and measurement. Coretta has had many perfect scores on her timed math tests. We are very proud of her progress!

In Social Studies and English they are working on what is called the Roxaboxen Project where they are studying deserts and learning how communities are formed and maintained. They are also learning the difference between non-fiction and fictional texts as well autobiographies and biographies. They are also continuing to expand heir knowledge in reference to certain literary terms such as setting, characters, setting, conflict, and plot. They have also started their Flat Stanley Project where they will be receiving letters from all over the world asking friends and relatives to spend a day with Flat Stanley, take pictures, and report their adventure back to the school.

Although her schedule is quite busy, I believe that she wouldn't have it any other way. She does however reluctantly need to schedule in a nap. Here is a picture of Coretta and Charlie taking a break from their busy schedules!
Posted by Unknown at 7:19 AM