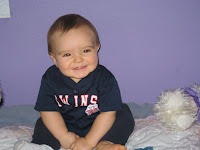 Geno Robert is officially nine months as of tomorrow. The time sure does fly when you are having fun!!

At the doctor's visit, Geno was not required to receive any shots. He was extremely happy about this, because he doesn't do too well with them poking his skin. They also measured him at a whopping 32 inches long and he weighed in at an astounding 29 pounds and 12 ounces!! If you are not up to speed on height and growth charts, the translation is that he is the size of an average 3 year old boy! I don't foresee any child bullying my giant in the future!!

With that said, the doctor said that he is perfectly healthy. He sleeps for 12 hours every night from 6:00p.m. until 6:00 a.m. As for crawling, he did not seem to be concerned with his lack of progress and his new found ability to roll to everything instead.

He proceeded to tell me that average babies his age usually start to walk around 12 months. Since Geno is not an average kid by any means, the doctor expects for him to walk on his own around summer time which means not until he is 15 to 18 months old. It is okay to have sympathy for me because that means I will need to carry him, (reminding you that he is close to thirty pounds and only going to get bigger) until summer. My back is literally killing me.

Check out this short video clip where Geno finally discovers that he can splash!!