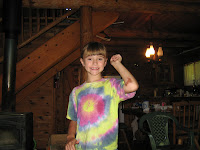 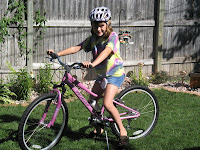 As you all know, Coretta is turning eight this September. This summer has been marked as being a summer of firsts for Coretta. This summer she learned how to swim being able to do numerous swimming techniques such as the back float, front float, back stroke, and doggy paddle.

She has also found the newfound freedom a bike can give you without training wheels and enjoys this independence by driving really fast and taking long bike rides on state trail as well as when we have had the luxury to go camping at both Heston's Lodge and Mille Lacs State Park. At Heston's Lodge she managed to muster up a lot of courage and determination when faced with her first big fall. We decided to go for a quick bike ride as a family down this one gravel path. I was in the lead, then Nick and Geno, and lastly Coretta. The gravel road was quite bumpy and when my bike began to gain speed, I knew that this could really be big trouble. I stopped my bike to hear Coretta screaming and crying at the top of her lungs and to my astonishment, she had lost control of her bike and fell face first over her handle bars. I regretfully must admit that she was not wearing a helmet this day, but received her first road scars on her knee, her belly, and her leg. She did not let this put a damper on her love of riding on the open road and did not hesitate to take her bike out again.

Furthermore, we all went to ValleyFair in August and realized that Coretta would have to be measured to see if she could go on all the rides. To our astonishment she not only made that requirement, but is a whopping 4 feet and 6 inches tall!! She had a blast at ValleyFair and went on many of the scariest roller coasters such as the infamous rickety white one, the Excalibur, the Corkscrew, and Steel Venom.
Posted by Unknown at 4:10 PM