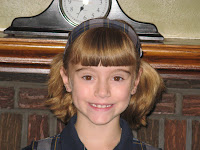 Coretta woke up at 6:30 a.m. Although she thought that she might set her monkey alarm clock, she decided against the obnoxious hoo hoo haa haa that would startle her into an awakened state on her first day of second grade. She quickly ate her breakfast and put on her uniform and was out the door by 7:45 a.m. Although she was apprehensive about starting a new school, making new friends, learning new rules and being faced with unfamiliar surroundings, she was pleasantly surprised at how welcomed she felt by everyone. She came home from school with stories of at least ten new friends she had made and a great teacher she believed would finally challenge her.

Hear all about it in her own words: