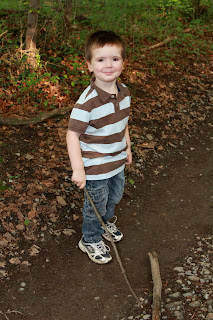 ery day. Although I am pleased with his progress, there are some words I would like to eliminate from his vocabulary such as "stupid" which seems to be his favorite word these days.
He is growing into a handsome little boy with a very strong will which can be challenging for the rest of the family. He always wants to"do it myself" or he simply won't do it. He has been getting better at asking for help which is also good to see.

When he is happy, he is extremely happy, and when he is mad, he is extremely mad. Clearly there is no in between. What I have learned the most about my son is that he is very independent, driven, smart, and wants to learn things his way.

For example, during one of his speech therapy sessions, his therapist had a stack of UNO cards in her bag. He pulled them out and immediately asked to play. She dealt out the cards and to my amazement, he could play UNO. He knows all of his colors (which I already knew) but he also knows all of his numbers as well. He would say ": I have a green 7 or a yellow 9." To me this shows great intellect. Although I was shocked, Tabea his speech therapist was not. She has labeled Geno as a very clever boy that knows many things and once his language catches up with his brain, it will amaze all of us with what he can do.

His motor skills have also improved. he can ride a bike with ease, he cut with a knife, and so forth with no problem at all. I sometimes forget that my son is left-handed, but once the utensil is in the right hand, he does well. The only thing that we need continuous work on now is cutting with a scissor.

School is going well for him too. He is having a hard time transitioning when Mommy isn't teaching on a particular day, but other than that it is going well. In fact, he knows all of the alphabet by their phonetic sounds which I find very impressive.

Next year, however, we have made the decision to switch schools for him. One of the influential factors is that we would like for Geno to become bilingual: meaning immersed in German. the school we have chosen has both English and German, has a Montessori approach, and seems quite academic. They also have forest days where they spend the whole day in the forest with a forest ranger who teaches them about nature as well as yoga classes and project based learning called the think tank.

Geno is a loving, animated little boy who loves his family, his friends, his dog, and life. Wonder what the next few months will look like? Stay tuned.
Posted by Unknown at 1:04 PM