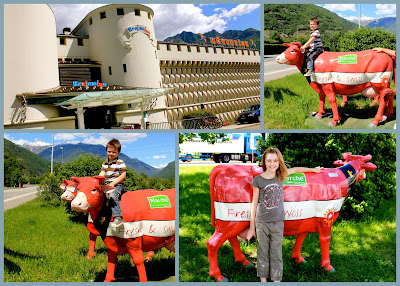 This particular weekend, we decided to venture into the Italian part of Switzerland known as the Ticino region. In Bellinoza, they had their annual Medieval Festival going on at one of the three castles that make up the city and believed that this would be fun for all of us. We started on the road early morning, and were there in two hours time.

Our hotel which was called Hotel Benjamin, had the facade of a castle, and was on the outskirts of the city. It had a wonderful outdoor park for the kids and a buffet style restaurant up the way. We would definitely stay there again. Neat, clean, quiet, and friendly. And to top it off, only a 6 franc taxi ride to the town center. Can't beat that. 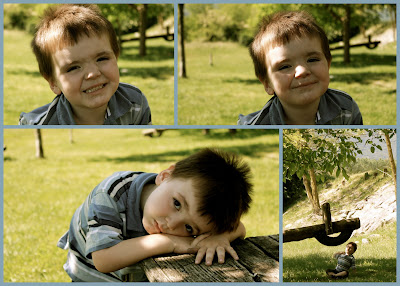 The first castle that we visited was known as the Castle Grande, and didn't have a touristy feel at all. I got the sense that this was where the locals went for picnics and leisure time with their families. You could see many people sprawled out on the castle grounds, young and old alike, enjoying the sun and solitude.

We stayed here for a while, the kids had some gelato, and then we made our way to the second castle where the Medieval festival was going on. 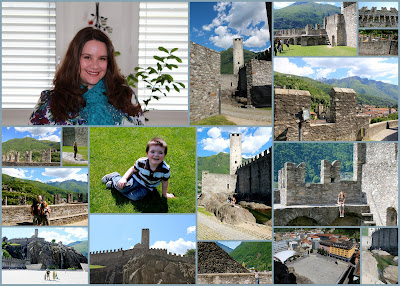 It took us quite a while to find our way to the second castle, but once we did, it was about a fifteen minute hike upwards. As we climbed, we had some of the most beautiful views of the city. Geno did exceptionally well, as long as he could go at his own pace.

Once we made it to the top, there were some ladies sitting at a table. We thought nothing of it and passed them. We then find out that in order to get into the festival, you had to pay an admission fee. Once we paid that, it was just a little more of an incline to the top.

Once there, we decided to have a cold one and sit at the picnic tables lining the area. 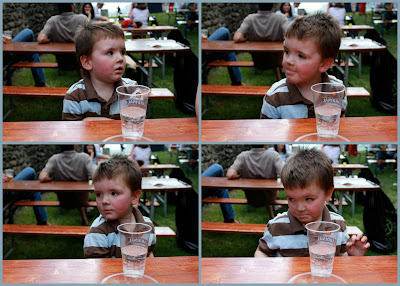 It is here where our adventure gets a little interesting. Looking for a picnic table, I asked two younger woman if we could sit next to them. They said it was fine, so we all sat down. The above picture shows some of the looks Geno gave to these poor women before deciding to spill his sprite all over the woman next to him. She proceeded to ask me if it was pop, water, or beer. I stated that it was sprite, which she seemed relieved. She stated that she would be driving home later and didn't want to smell like booze just in case she was to get pulled over. 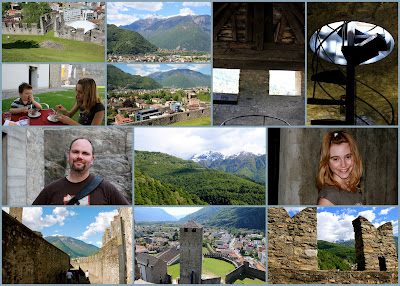 After this encounter, we decided to venture into the castle's walls. It is here where you truly felt as if you had stepped back in time. Everyone was dressed in Medieval clothes, and different booths were set up where these people in costume sold their goods. The goods for sale, were all goods that one would purchase during the Medieval period such as leather goods, swords, jewelery, as well as food tied to a spit fired grill. Not that I would necessarily want to eat anything I saw tied to these grills, since many seemed to resemble small skinned dogs. 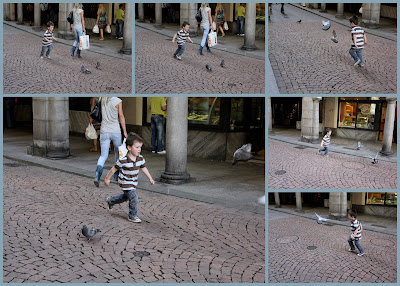 Once we finished there, we made our way down from the castle, where Geno ran into some more of his two legged feathered friends. There is something about a pigeon that makes Geno feel that it is his ambition to chase them. He could do this for hours on end, even if other passersby want to feed them. Cheap entertainment I guess. 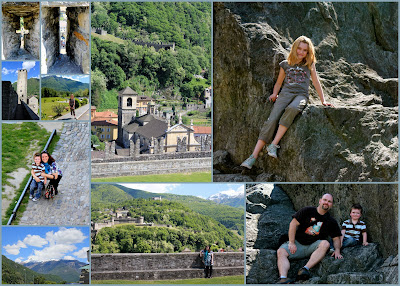 Coretta and Geno both enjoyed climbing the rocks around the castle as well as standing at the stoned fence taking in the scenery. There is something about castles that can really bring a family together. 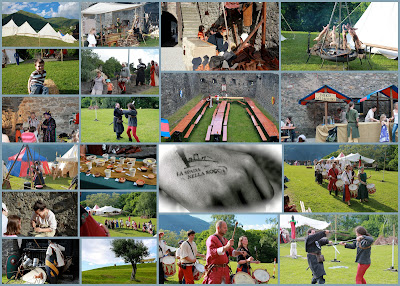 Above are some pictures of the La Spada Della Rocca festival where we saw people creating pottery, jousting, and enjoying the day. 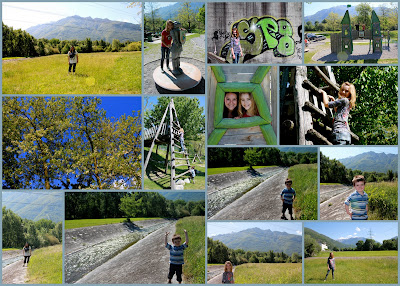 I look forward to our next weekend getaway and wonder what treasures we will find there.
Posted by Unknown at 1:40 AM