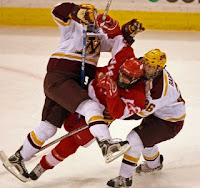 Tonight Nick and I are going to the WCHA Final Five hockey game at the Excel Energy Center. It should be a pretty great game to watch!! We actually have box seats. His company has box seats for almost every sporting event it seems! I have only watched the Twins in the box before, never hockey! Nothing like getting a chance to watch the Golden Gophers!! My dad is envious. He lives, breathes, and eats hockey. I told my Dad that he needs to come up for a game some time, but it is hard to get the small town boy to the big city. Anyways...here is a picture of the Golden Gophers against the badgers.
Posted by Unknown at 7:15 AM