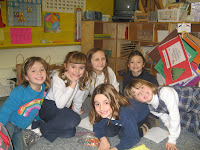 Coretta and her team under the guidance of me as their team manager did very well at the competition held at Harding High School on Saturday March 1st. Even though they were not eligible to compete at the state level, they were still judged on their creativity, completion of the challenge/task, performance, and teamwork. The judge stated that their lyrics to their song and the play itself were exceptionally written. They also liked their creation of their background and the cloud design. Here is a video of their performance in their play Rosa Parks Goes Back in Time.